"Its a prescription for 'The Donut In Granny's Greenhouse' by the Bonzo DoDah Dog Band. Take that thrice daily till the temptation to top subsides."


"Did I ever tell you about the time I shared a chillum with the Sensational Alex Harvey? He punched a cat for staring at him."


"Last one in the tour bus thinks Genesis were better AFTER Peter Gabriel left!"


"All four of them got into jazz-funk. They now live in Dubai. May they rest in peace."


'No way he is a left-handed guitarist! I should know. I rigged his stack on the Snow Goose tour."


"There is no way you can get a Mellotron in the boot of a 1970s Triumph Toledo."


"She'd have to be built like a brick outhouse to "throw" a Mellotron anywhere. "

"Nice teashirt by the way.
Any outfit that can acknowledge its debt to Iommi's fretwork displays a knowledge and history of respect for one's elders."


"..if one of them goes on to form some sort of guitar-based band that invents a certain sound - even if its mildly derivative of certain prog bands of the 70's - then , Magz, my work is done."

Never seen this series. Fan of Alan Partridge so interested in opinions of this.

Like all of the various Steve Coogan characters, Saxondale isn't anywhere near the same league as Alan Partridge.

"Tommy Saxondale is an ex-roadie with anger management issues and his own pest control business in shitty suburbia Stevenage."
In the 70s he roadied, etc for many of the big progressive rock bands and now - rightfully so - he looks down the superior prog-nose at them wot missed out on the experience. So sure of himself, Tommy considers himself an independent-minded person and takes most opportunity to belittle music of current times. ...and the cult of Led Zeppelin (the band he never got to roadie for.)

The brilliant series went for two seasons - 2006-2007. Along with, say The New Statesman, its one of those criminally-ignored Brit comedy tv series.

Steve Coogan is an excellent impersonator (most recently in the movie, Stan & Ollie.) But in Saxondale he is not impersonating. (He did a great Alan Partridge, but personally I would like to see him do David Frost since the face is similar.)

The real jewel of the series is actress ,Morwenna Banks, playing Vicky. Vicky doesn't miss an opening to AMICABLY cut him down, and since he utterly depends on her to line up jobs, he has to watch his tongue -which is totally against his nature. 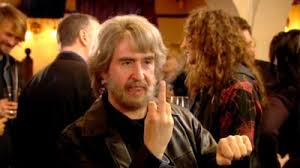 Thanks Wallace now I know where you are coming from..Stevenage is about 40 miles from my city and yes it is a dump